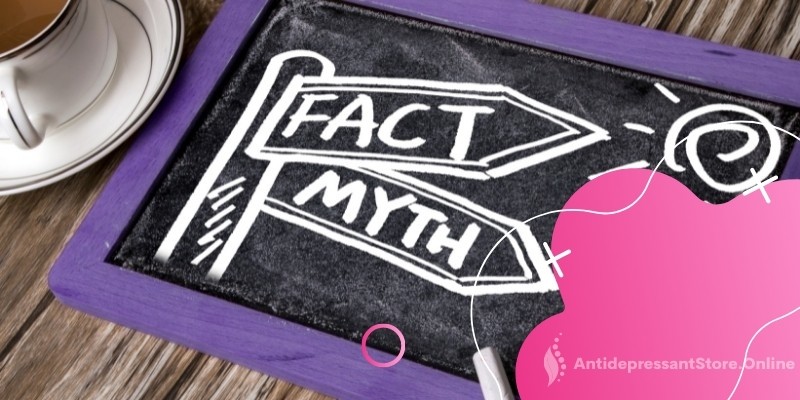 We can thank TB for the variety of antidepressants, available on the market today. No, this is not a myth, it is true.

The first antidepressant was discovered by accident. In the early 1950s, Iproniazid was being tested as a new drug for tuberculosis. The medicine worked, but not only in the way it was expected it to work. The patients felt improved mood and increased energy levels.

The doctors became interested and were wondering: what if…?

And this is how the antidepressants were born.

Though, of course, some myths about antidepressants do exist. Let’s figure out which those are.

Myth no. 1. Antidepressants are the best and fastest way to treat depression

This is true, yet not in every person.

Studies have shown that antidepressants are effective in relieving the depression symptoms in about 40-60% of people within six to eight weeks.

Regular exercise and cognitive behavioral therapy (CBT) are great tools for overcoming the symptoms of mental disorders. A healthy lifestyle helps prevent them from occurring.

In terms of speed, the antidepressants work relatively quickly. Many of them are used for at least 1 to 2 weeks (up to 6 weeks) before the effect manifests. Once the improvement is achieved, treatment is continued for six to nine months or longer.

Myth no. 2: They make us eat more and gain weight

Some antidepressants do affect appetite in some people. However, there are several important sub-clauses on this issue.

Cyclic antidepressants (Amitriptyline, Doxepin, Nortriptyline, and others) really do make you gain weight. This is a very common side effect, yet only with this group of drugs. Since one of the consequences of moderate to severe depression is weight loss, this may not be such a bad side effect.

Selective serotonin reuptake inhibitors (SSRIs) lower appetite. For example, a drug from this group Atomoxetine (Strattera) reduces appetite in 16 out of 100 people.

Myth 3: Treatment makes you sleepy all the time

Usually, things are the other way round. Antidepressants can make us cheerful and generally happy.

On the other hand, drowsiness and fatigue are common during the first weeks of treatment. These side effects are usually short-lived and disappear on their own.

Myth no. 4: Once you start using them, you will have to take them for the rest of your life

Some people may be advised to take their medications indefinitely. And yes, therapy can last for years.

Studies have shown that by continuing to take antidepressants for several months after most symptoms have cleared you reduce the likelihood of a subsequent relapse.

Immediate discontinuation of the drug may lead to depressive symptoms. Therefore, long-term therapy (from 6 months and longer) is necessary for every patient.

Myth no. 5: They are addictive

The substances that the antidepressants contain are not addictive. According to the American Society of Narcological Medicine, one of the main components of addiction is the inability to control one’s behavior. That’s not how antidepressants work.

People say they feel that they are in more and more control over their behavior and life. They get tired less, can communicate normally and work more productively.

However, a sharp decrease in dose can cause some side effects (withdrawal symptoms). Therefore, when the time comes to stop treatment, the dose should be lowered slowly, sometimes over several weeks.